Alhambra, California’s real estate has a connection to one of America’s best-known early writers, Washington Irving.  You can see it in not only in the name of the city, which lies seven miles east of Los Angeles, but also in Alhambra’s various streets and neighborhoods.  Among the stories which Irving is celebrated for writing are Rip Van Winkle and The Legend of Sleepy Hollow with its spooky Headless Horseman.  In 1829 Washington Irving also wrote Tales of the Alhambra.

Tales of the Alhambra tells of Irving’s journey from Madrid to Granada, Spain, where he stayed in a historic Moorish sultan’s palace called the Alhambra.    Irving described the Alhambra as “picturesque and beautiful” and said that it was situated in “one of the loveliest landscapes I have ever seen”.  He goes on to write about the exotic and passionate people of this part of Spain and the mixture of their Moorish and European roots.

Spanish art and culture had a profound impact on American writers and artists of the early and mid-1800’s.  Henry Wadsworth Longfellow and Thomas Eakins would also travel to Spain for sojourns of artistic inspiration.

And in California a 10-year-old girl named Ruth and her sister Anne were enthralled by Irving’s romantic book that they read in the early-1870’s.  Ruth and Anne’s last name was Wilson… and their father was named Benjamin Davis Wilson.

Benjamin Davis Wilson (also known as Don Benito Wilson to many locals) was a land baron, second mayor of Los Angeles, founder of Wilson College which ultimately evolved into USC, and US Army veteran who held title to vast quantities of land between Riverside and the west side of what is now Los Angeles.  Much of what is now Alhambra was part of Wilson’s land holdings.  Additionally, Mount Wilson which rises above the San Gabriel Valley near Los Angeles is named in his honor.

Wilson was establishing a housing tract during this period and various recollections describe his daughters convincing the family that the exotic name of Alhambra would be a good designation for this area in the west end of the San Gabriel Valley.

The Alhambra Tract was surveyed in 1874.  It was a family endeavor.  The girls provided inspiration for the name, Don Benito supplied the land, and his son-in-law devised a state of art means of delivering water to the property.  In the 1870’s, the Southern Pacific Railroad established their southern transcontinental rail route through Alhambra eastward to Texas and Louisiana.  To the city’s eastern boundary was the San Gabriel Mission with its Moorish architecture and in 1903 Alhambra would formally incorporate as a city.

The San Gabriel Valley was blessed with a substantial aquifer and Wilson set about to harness this critical water source by directing his son-in-law, James Debarth Shorb, to drill wells in Alhambra.  Wilson was determined to not have his developing real estate neighborhoods be a ward of adjacent cities and municipalities.  Later Shorb would become well known for his systems of irrigation piping and turning marshlands into productive land used for farming and residences.

Washington Irving’s writings did not just provide a name for a city, but also names for some of its streets and neighborhoods.  Granada Avenue bounds the east end of the city. Granada is the capital of the province where the Alhambra is located and it is part of the Andalucia region of Spain.   Alhambra Road is named after the palace/fortress in Spain which was built for the last Muslim nobility in Spain.  In 1492 it would be conquered by the Spanish and rediscovered by European scholars and tourists in the 19th century. 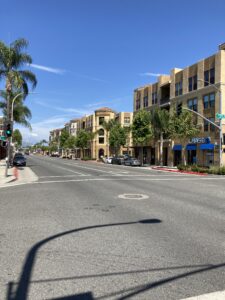 Main Street in Alhambra started its existence as Boabdil Street.  Boabdil, also known as Abdallah Muhammad XII, was the last Muslim noble to live in the Alhambra.  King Ferdinand and Queen Isabella would absorb the Alhambra into Spain in the 1490’s and allow Boadbil to continue as a puppet figurehead.  In 1902, the year before Alhambra incorporated as a city, Boabdil was changed to Main Street because so many people had trouble pronouncing its name.

The Patio de la Lindaraxa serves as an entry garden to the Alhambra in Spain.  Alhambra has Lindaraxa Park Street running from Story Park to Granada Avenue.  The street splits in two and runs north and south of Lindaraxa Park.

Almansor Street also derives its inspiration from Alhambra’s Moorish heritage.  Almansor evolves from the Arabic word Al-Mansur, which is frequently a designation associated with royalty and translates to the notion of victory.  A one block street in the northeast region of Alhambra is called Alahmar Street.  I had always incorrectly thought it was a combination of words Alhambra and San Marino.  In reality it is the name of an Arabian prince who helped construct and lived in the Alhambra in Spain.

The weather of this Southern California city is similar to Spain and supports architecture that is consistent with the location of the original Alhambra.  Spanish Mediterranean architecture is one of the most common architectures in Alhambra.  These homes frequently have patios with fountains as one approaches the front door. Porches are present and prominent to the point of sometimes concealing the exact point of entry into the house.  Strong tile roofs generally have a red color which is consistent with the meaning of the word “Alhambra”.  The name Alhambra comes from an Arabic root which means “red or crimson castle”.

Two short streets in central Alhambra honor the author of Tales of the Alhambra.  Washington Street and Irving Street run parallel to each other from Atlantic Boulevard to 6th Street.  Five of Alhambra’s twenty-six historical neighborhoods have names from Irving’s book.

In a twist that would be appropriate for a Robert Altman movie showing how lives can intertwine, Benjamin Wilson’s daughter Ruth married into a prominent real estate family.  The name of the San Gabriel Valley family was Patton.  Her husband’s name was George.  And their son would be named George S. Patton Jr. and gain international recognition as one of World War II’s most successful and aggressive generals.

So, if Washington Irving had not traveled to Spain in the early 1800’s, Alhambra along with some of its streets and neighborhoods might just have different names.  And with different names, maybe even a different personality. 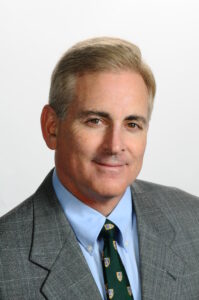 Gary Frueholz is a realtor and broker with Dilbeck Real Estate, a past member of the Alhambra Planning Commission, a Certified Senior Real Estate Specialist, Certified International Property Specialist, and can be reached at 626-318-9436.  See his stories at www.garysstories.com. Gary has professionally written for Los Angeles Magazine, Westways, the Orange County Register, and the old Herald Examiner.

Note: Just above the Golden Gate Bridge, in San Anselmo, CA, the Sleepy Hollow neighborhood and streets are named in honor of Washington Irving and his stories, who was a good friend of Mr. Hotaling, an early resident. As far as we know, Washington never slept here.

The Hotalings built a lavish mansion at the end of the two-mile road, and named it “Sleepy Hollow” in honor of The Legend of Sleepy Hollow, a famous short story written by their friend, author Washington Irving.