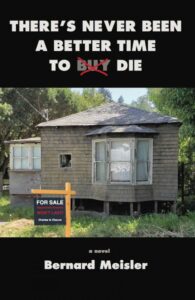 “The best satire about Mill Valley since McFadden’s The Serial. Many have tried and many have failed, but Meisler hits Marin County’s quirky nails smack in the head with his hard-boiled real estate agent’s noir-cynicism. Filled with homages and insider snarks, I laughed on damn near every page. Meisler will either get Mill Valley’s acclaim or he’ll get run out of town.” —J.Macon King, publisher of MillValleyLit

Meisler brilliantly transforms the style and attitude of the Chandler/Hammet hard-boiled detective into a Marin County real estate agent.

The following excerpt is from:

THERE’S NEVER BEEN A BETTER TIME TO DIE, by Marin County local, Bernard Meisler: a noir/mystery/crime novel/comedy/satire of late-stage capitalism, as seen through the eyes of a cynical former New Yorker, now a fish-out-of-water real estate agent in “Mellow’ Marin County, California.

The protagonist (and unreliable first-person narrator) is Rick Davies, a dissipated, ethically challenged (yet somehow charming) “hard-boiled” real estate agent who, while preparing an estate sale, stumbles across an old crime scene. A longtime fan of mystery novels, he decides to take on “the case.” Or does he? Is there even a case, or is it just his imagination? Along the way, while unconsciously imitating classic noir characters, he tools around in his Basic Marin Wheels (yes, that’s what Marinites call BMWs), getting into one jam after another, all the while spinning yarns and making derisive social commentary. Every tall tale he tells—essentially everything that occurs in the book, aside from the main plot—actually happened.

Marin Gothic: The novel takes place in Marin County, CA, 2008, just before the bubble burst. Once the home to the Grateful Dead, Gary Snyder and Sam Shepard, the newer demographic tends toward hedge fund managers, dot-com millionaires and trophy wives, where people, without any sense of irony, paste “Keep Tahoe Blue” bumper stickers on their gigantic SUVs. Despite widespread affluence, conspicuous consumption and a massive sense of entitlement, there is an undercurrent of fear among the residents—of a downturn causing them to lose it all, their kids drinking or taking drugs (or murdering an Italian policeman while on vacation in Europe), of falling behind their neighbors, of getting found out—behind every great fortune is a great crime.

It was a beautiful day. As per usual. Seventy-two and sunny, not a cloud in the sky, a refreshing zephyr blowing in off Richardson Bay. Back East, you get 18, maybe 20 days a year this lovely. When it’s like this in New York City, working stiffs take long lunches, if they don’t skip work altogether, the girls are half undressed and everybody’s in a great mood. Here, it’s like this more often than not, 200 days or so a year, so nobody cares.

Kirsten emerged from the four-door garage in yet another car. This time it was a Prius. I hopped in the front seat. “Really?” I couldn’t believe she could stand to drive this piece of junk after the M6—it’s like a $12,000 Hyundai with a $15,000 battery. It’s the car for people who hate cars, the car that sucks all possible joy out of driving. “Feeling guilty about destroying the planet?”

“Not really. I was at an Adyashanti seminar recently? And some kid in tie-dye and patchouli complained about his parents not caring about the environment, and he asked Adya what he should do about their pig-headedness, and Adya said, ‘How do you know they’re doing anything wrong? It seems like it’s wrong to drive a giant SUV and burn up what’s left of the world’s dwindling fossil fuel supply and contribute to global warming. It seems wrong to me too. But what do I know? Maybe it just seems that way. Maybe it’s exactly what the planet needs to have happen—for us to run out of oil sooner rather than later. Doesn’t make much sense, but I don’t know—you don’t know either. Nobody knows!’”

“So why do you drive this heap when you have an M6?”

“I just picked it up a few days ago, for the new job. Makes a better impression on clients. You know, show ’em I’m green and thrifty. Seems the expected Al Qaeda invasion isn’t happening and Hummers are going out of style.”

“Yeah, where’s John Walker Lindh now that we need him?”

I wondered what else was in that seemingly endless garage. A DeLorean, a Bentley, a mint condition Stutz Bearcat? Or maybe, like most of the houses I saw, Kirsten used her garage as a giant storage bin, and it was packed with piles of musty books, complete runs of ’60s National Geographics, 8-track players, useless turntables and vinyl records, black-and-white TVs and VHS tapes, out-of-style clothes that didn’t fit anymore and never would again—the typical 20th-century detritus I wade through for estate sales.

Right, estate sales. That’s how this mess all started. Probably better if I don’t dredge Kirsten’s garage; I’d probably find something I didn’t want to. Everybody’s got a lost turtle of some kind. We silently descended the winding streets till we reached Tiburon Boulevard. The way the Prius didn’t make any noise creeped me out. Supposedly a lot of blind people have been run over by Priuses because you can’t hear them coming.

We hung a Roscoe and headed over to The Ghetto, as the swells in Tiburon refer to Mill Valley. Tiburon was where the wealthy lived; folks in Mill Valley are just rich—Mill Billies. You know what the difference is between rich and wealthy? Rich people buy courtside seats at Warriors games. Wealthy people own the Warriors. Everything’s relative, I guess. Mill Valley is a ghetto of sorts. Sure there were loads of new, upscale McMansions, but it was still peppered with plenty of unrestored tear-downs, many of them still occupied by burnt-out leftover Bohemians who paid ten grand for their hovel 40 years ago. The present-day buyers are banking on getting their own massive payoff. I mean, why else would a couple making $300k a year between them take on an $8 grand a month mortgage, willingly become house poor, if they weren’t sure their $2-million-dollar ranch house wasn’t going to be worth $10 million in a decade or two? Prices were going up 25% a year, and prices never go down, not in Southern Marin, it’s a one-way rocket ship to the moon! That’s what I told my clients, and they believed me, because, just like Fox Mulder, they wanted to believe. Hey, if they don’t understand compound interest, believe trees grow to the sky and in trickle-down economics, that’s not my fault. Who am I to talk people out of their delusions, if it makes them happy? Where would we be without our delusions?

We cruised past Blackie’s Pasture, with the life-size bronze sculpture of the eponymous horse who once grazed there. Blackie was a former cavalry horse who fed in this very field for 28 years until his death in 1966. The Tiburonites never got over it, and erected a statue in his honor in 1995. I find this fascinating—I heard that sociopaths reserve their minimal feelings for babies and animals. I don’t know why—low stakes? If it’s true that behind every great fortune is a great crime, that meant there were a lot of criminals in Tiburon. Not street criminals given to violent crime, but crooks nonetheless, and most crooks are sociopaths, so it made sense that these monied scum would memorialize a horse that had been dead for 30 years instead of one of their more famous human scions, say Pat Paulson, Mariel Hemingway, or Courtney-Thorne Smith.

We crossed the 101 and entered Mill Valley proper. Tiburon turns into Mill Valley half a mile or so before the highway, but that neighborhood is known as Strawberry, and friends don’t let friends live in Strawberry, though I’ve sold my fair share of Kott houses there. Better than Novato, I guess. Novato is the worst place in the world, a scorched earth, post-apocalyptic wasteland overrun by mutant freaks. Better you should live in Somalia. You know what Novato means in Spanish? “Don’t go to.” At least that’s how folks in Southern Marin feel about it.

No surprise, a traffic jam. As we crawled over the bridge, I saw what was causing the backup—a mattress in the middle lane of the northbound 101. How much can a used mattress cost from Goodwill? Fifty bucks? Tops? And you know they’ve cleaned and fumigated it. Why then do I constantly see old beater cars—usually a rust-bucket vintage Accord—packed with riffraff, with a mattress precariously tied to the top? Who in their right mind would take a used mattress from somebody and tie it to their roof? On the other hand, Mitt Romney once tied his dog to the roof of his car, and he might be President someday, so who knows why people do what they do? For God’s sake, there are people out there who prefer Journey to the Dead, like Chicago-style deep-dish pizza more than coal oven, and think Rescue Me is better than Deadwood. But haven’t these mattress-carting dopes heard about the bedbug epidemic? I wish at least somebody had been a boy scout, so they’d learned how to tie a damn knot and the mattresses wouldn’t fall willy nilly on the highway all the goddamn time. If you listen to the traffic reports on AM 720, you’ll hear at least once a week: “Mattress obstruction on the 101.” As if the highways weren’t messed up enough already. Bay Area traffic is terrible, and it’s especially bad in Mill Valley, as there are only three ways out of town, and they’re all single lane. Rush hour is a nightmare. We all have our crosses to bear.

The street narrowed from two lanes to one as we made our way onto East Blithedale, right before the Chevron station. A black SUV sidled up on our left, not slowing down to let us pass, or speeding up to get ahead of us. Kirsten had to lay on the brakes so we didn’t get run off the road. I opened my window, stuck my middle finger up high and gave it a spinning motion so the douchebag could see how I felt about his driving. A Lexus. What did I tell you?

“Jesus, road rage much?” Kirsten asked as I slumped back into my seat.

“It’s my civic duty to let him know he’s an asshole.”

“I’m sure he knows already. People are very self-aware in this town, what with all the therapy, meditation and self-improvement seminars. It’s barely noon and you’ve already crossed paths with one asshole. You know what they say.”

“If you run into more than three assholes in a day, you’re one of them.”

I’d have to remember that. It didn’t really make sense, but it sort of did. Good line to drop at a cocktail party. It occurred to me that she was being kind of an asshole. That made two today already. I’d better be careful.

And there’s never been a better time to Buy than now from:

Don’t like Amazon? Also available through local bookstores and other online sellers. 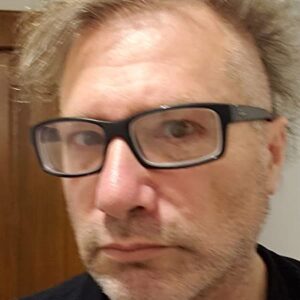 About the author: Bernard Meisler is Editor-in-chief of Sensitive Skin magazine, publisher of Sensitive Skin Books, and host of the Sensitive Skin podcast. He has been published in Between C&D, Yeti, Gathering of the Tribes, The Atlantic, various Unbearables anthologies, and elsewhere. His meta-noir satire novel There’s Never Been A Better Time To Die was published in fall of 2019.