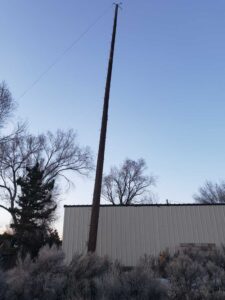 So yeah, it’s only a piece of wood. But, this 72-foot-tall piece of wood has been stuck in my backyard since about 1975. Before it called Washoe Valley home it lived at the SPPCo office in Carson City, NV for 25 years (erected in 1950), where it served as the main antenna mount for western district communications. (Ed note: Sierra Pacific Power Company d/b/a NV Energy, is similar to California’s PG&E).

When they retired it my dad was able to bring it home and he had Harker & Harker plant it 12 feet deep in our yard. Dad proceeded to mount a 40 x 45-foot beam antenna for his ham radio endeavors.

As an adventurous teen I would free-climb the pole to see the view that we now can get easily from inexpensive drone camera footage, but I got the rush, which was so much better payoff! 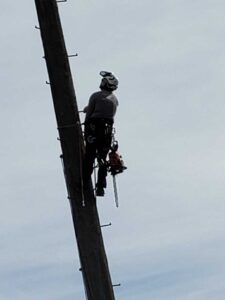 The pole stood proudly above all the houses and trees in the valley. It was the thing that visitors used to find our house through all the years. If you had forgotten how to get to my house you could just drive to Washoe Valley and look for the pole and there you were! This happened regularly through the years.

Through that antenna I listened to my dad talk to people from, literally all over the world. I can clearly remember talking to the radioman on this unheard-of place in Guyana called Jonestown. They were all excited that a congressional delegation was going to visit them the next weekend. We told him we’d be on the same frequency the next week to talk to him again. A great guy with lots of hope.

The next week we met him at the same frequency and his hopeful attitude from the previous week was turned to fear and worry. The congressional delegates turned out to be a group of investigators that were accusing the people of the settlement of being an illegal cult that was taking part in tax fraud, and kidnapping, abuse, and more.

The next day we started getting reports of how over 900 people had committed suicide or been killed by drinking poisoned Flavor-aid.

It’s just a piece of wood.

After dad passed away I got some of his friends to climb the pole and remove the antenna for their own use.

At that time, I dreamed of a star… a Christmas star. That’s when I installed a pulley up at the very top of the pole so I could hoist a large 8-foot star wrapped in Christmas lights way up in the air for the whole valley to see every year. Each year it changed a little bit. Each year I would give the star a little TLC and revive it. 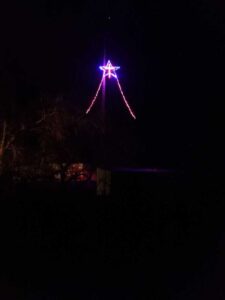 This year the star fought a valiant battle with the 100+ mph Washoe Zephyr winds and one of the guy-ropes broke and the star crashed (prophetically) into the pole where it got mangled against the climbing rungs. I remember thinking that day that the same fate would someday come to the old wooden pole.

Well that day came. The other day I noticed it had started tilting toward my garage! Looking at the base you could see a 2-inch gap between the earth and the pole on the west side of the base. It had obviously started rotting underground and had finally succumbed to the strength of the crazy strong winds out here.

It was time to lay it to rest. Today (Wednesday 3-2-22) was the last day this piece of wood stood tall – a product of a once-huge tree that became this very useful and – for me memory filled – piece of wood. Today I say goodbye to a big stick that has been a sturdy, swaying, enduring ingredient in me and my families’ life, and, though no tears were shed, it’s more saddening than I would have ever guessed. 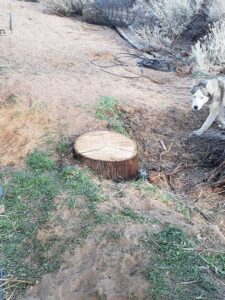 Thanks for taking the time to read this. Just jumbled memories of an old fart, but they’re my memories. Next year maybe the star will reside on the shorter 40-foot steel tower.

After I wrote this, I was going through an old locker at work and found a copy of “Pipe & Wire”, the old company monthly newsletter. It is the 1982 special issue “An historical profile of “SPPCo.” In it there is the following picture that shows the pole being planted at the Carson City SPPCo warehouse in 1950. How cool is that?!?! Timing is everything. 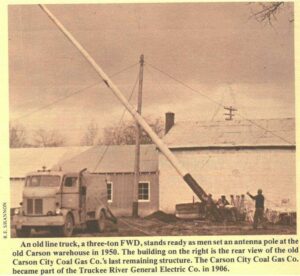