The best unpublished short story I ever read was called “The Death of Johnny Wadd.”  It was written by a student in my creative writing class at San Francisco State University, back when I was considered a hotshot.  The writer’s name was Will.  He was the kind of boy foreigners think of when they dream of Americans – he was a Shark or a Jet, something tough, a rolled-up cigarette of a guy, dark but intellectual, breathing in heat and exhaling coolness.  He seemed like a character from William Burroughs, a back-alley Tangiers pick-up who gets what he came for and breaks poor Bill’s heart.  I liked him immediately.

The way the course worked, we all wrote short stories and then sat for a full-class critique.  I was brilliant, it was generally acknowledged, at the critique part.  When the blonde girl, Sally, younger than most of us but trying really hard to seem sophisticated, laying on her European travel background whenever she could, oblivious to the toxic Euro-trash pheromones she emitted,  advanced her story of incestuous siblings in the south of France, I was the one to observe that while the brother convincingly sprouted wood at the appropriate moment, the sister was in fact a wooden character entirely, and so our response to the strenuously titillating encounter in the oh-so-cliché hayloft scene left one feeling bloodless and mildly irritated, as if, perhaps, a tiny splinter of straw had been removed.  Will added that he enjoyed the French countryside description, but that his sexual appetite had been better whetted by the waitress serving soggy mushrooms on offer at the sad café in the siblings’ quaint village and that Sally might reconsider her as main character in her revisions.  We looked at each other, Will and I – the incest-author completely forgotten – and it was critical love at first sight.

Of course, we both had to go home and write our own stories.  But how easy to surpass the drivel we had thus far seen!  The only question was, how far to surpass it.  In my mind, the next “Hills Like White Elephants” soon to emerge from my keyboard would trod heavy upon the soupy remains of my classmates’ incompetence.  Will encouraged me, cheerleaded me in a sense, though he never said a word outright.  It was something in the ultra-cool Bukowski air he had that made me feel that I was an artist – no, an artiste – and that he and I together, a modern day Scott and Zelda without the alcohol and madness, Stieglitz and O’Keefe in tough-edged prose instead of silver halide and blooming vulvas, would soon engender another SF Renaissance.  He never said much about what he was working on, and so I kept my story, my secret weapon, to myself as well.

Gus, with the premature balding issues and his nicotine fingers parted always, as if willing to accept a celestial cigarette if only one might be delivered, read his story – we were all certain it was memoir, that Gus couldn’t really do fiction – about beer and abuse and the father he might have loved if only he’d known better.  There was something heavy-handed and vaguely sexual about baseball in there too, though I can no longer recall if young Gus was pitcher or catcher in the scenario.  I remember the bat being a symbol, a Louisville Slugger with a highly resonant name branded into the fat hitting end.  He may also have, embarrassingly for all of us, alluded to Allie’s green poems on his pre-leukemia mitt.  Salinger was safe at first, it goes without saying.  My productive suggestion – we were all encouraged to remain positive at all times – was that Gus focus on the sport, or on the Dad, but that he refrain from conflation unless his goal was a story entirely parenthesized by the tedium of a seventh-inning stretch.   Will, sensing that our author-du jour was in dire need of further constructive encouragement, added that while Gus could certainly pitch a certain idea, he must also be sure that his intended home runs reach those he’d left dozing in the bleachers.  Our professor added diplomatic Way to go’s and Keep it up’s, beaming all the while like a demented Buddha as it became more and more clear that Will and I were actually setting the bar for the class.

I’d heard a rumor that I was referred to as Dorothy Parker1 and Will as DP2.  This did not displease me.

At home – a rented room in a very nice split-level in the Sunset, a Muni stop just two blocks away providing the ride to SFSU, though I told everyone, including Will, that I resided in a North Beach walk-up straight out of Dharma Bums – I wrote my story called “The Orange Peeler.”  It was gritty and set in New York and so both exotic and real to this pampered San Francisco crowd.  My story took the spoken lines from Stevie Wonder’s “Living for the City” as its springboard – “Wow, New York. . . skyscrapers, everthang. . .”  I followed that black cat after his arrest, had him homeless and shopping cart-bound and finding Truth in an orange peel.  It was all very ironic and racially sensitive and somehow invoked the deep South without ever taking the Greyhound out of Manhattan.  It was a subtle and marvelous masterpiece.  And it stubbornly refused to come together as an actual story, no matter how many late nights I put into it.  It was a good idea, a good seed, but it needed a better writer, a much better writer, to bring it to full flower.  As the semester wore down and the time for my move from the high chair of Judge Judy (I liked this appellation much less than the Dorothy Parker handle) to the author’s hot seat approached, I found myself sleepless and increasingly desperate.

The whole orange-as-symbol thing made Gus’s bat seem nuanced by comparison.  The Orange Peeler himself aspired to the woodenness of ol’ Sally’s diddling Sister; my creation was more caricature than character, a fictional entity as plastic and de-genital’d as a Ken doll.  Even my “authentic” Manhattan atmosphere – I’d been there once, and I’d seen Taxi Driver like three times – came off as a tourist’s version of the city.  A tourist just begging to be mugged, if I was really going to be honest.

Of course my story was the last to be read aloud.  I tried to keep up the hope that it was actually better than I thought, that I was my own worst critic, all the things you tell yourself.  But I knew that for all the garbage I had my Orange Peeler picking through, the most noxious stink was right there on the paper I held, the whole class looking on, everyone eager for the profundity and erudition and wit of DP1.  Will read his story just before mine.  We were the “Captain, My Captains” and so we were the finale, the Big Act to bring the curtain down.

Will’s story, set in the last days of porn star John Holmes, was a marvel.  His use of real pornographic words felt artful, not gauche; his period details – long pointed shirt collars and mustaches and flared pants and gone-to-seed disco numbers under garish lights that showed the cracks in the make-up – were so real we felt transported to an L.A. none of us had ever imagined until Will made it so; the plot wasn’t so much “plot” as an existential rumination à la Camus on the state of California, with all meanings intended though never explicitly stated.  Will included certain apocraphies such as the legend that Johnny never achieved full tumescence because if all that blood went all the way to the tip of his enormous member John would pass out from light-headedness.  He integrated myths and truths in service of the fiction, which was really all about our obsession with outsized celebrity and the way we all whore ourselves out to Cali’s consumer culture, while wagging our Judge Hathorne fingers at poor Johnny Wadd as he lay dying of Aids alone in some decrepit bungalow on the outskirts of Los Angeles County.  Will wrote particularly about John Holmes which allowed Wadd to do all the heavy lifting the story needed; he never mentioned the words California or Culture or Consumerism once, though they bewitched each expertly-wrought sentence, leaving us all nearly gasping when Will turned his final page.  We’d read – been read to – about a certain guy, yet we’d all come to know ourselves and our world a little better.

The remarks after I read “Orange Peeler” can most kindly be categorized under the heading damned-by-faint-praise.  My face grew hot, and though I kept my eyes downcast, I caught Sally’s satisfied smile and I heard Gus snigger – even professor Buddha could find no empty platitudes to plaster over my broken effort.  The anatomy of my story’s failure wasn’t even worth covering with the usual fabric of euphemisms we’d all learned to drape over the face of such disasters; instead, my countless stubbed toes were left to bleed and wiggle in the wind – smelling all the worse, following as they did on the heels of Will’s Waddesque triumph.  I wish I’d asked Will for a copy of his story that night, but he was embarrassed for me and lit out of there quick as he could.  I never saw nor heard from him again.

I’ve moved on – I have a one-bedroom in the Noe Valley neighborhood now.  In the old days I would’ve said it’s “Mission-adjacent.”  I’ll admit that when I’m feeling particularly masochistic or I’ve had too much to drink, I might pull out one or two of my unpublished stories and commiserate with my cat about the unfairness of the world.  But never that story.  And some evenings, working late, my accounts at Bank of the Worst almost completed and after Mr. Johnson the branch manager has patted my shoulder, lingering just that much longer over his squishy goodbye than my #MeToo sensibilities can countenance, I’ll search the Pushcart Prize nominees and scan the O’Henry’s, always hoping to find “Johnny Wadd” placed in the rarified spaces where artful artifacts sometimes wind up, even if by accident.  I resist the urge to Google Will himself.  What if he’s made it big, a record producer or something in cinema, something far cooler than banking, and he’s got a goatee and a green sports car with a golden girl in the passenger seat?  I’d have to picture her laugh and the way she looks at him when he tells her all the stories he knows. 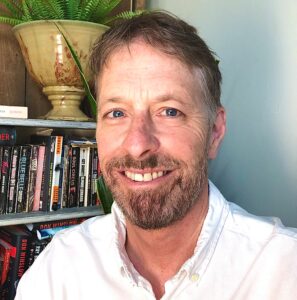 Jeffrey S. Ryan teaches English at a high school in Larkspur, CA. He grew up on the East Coast but emigrated to the Bay Area as soon as he had the chance. He writes stories and poetry and is currently working on a memoir about Bob Dylan and a novel about bad behavior. Years ago, in a Masters program at SFSU, he witnessed some shenanigans that inspired this story.