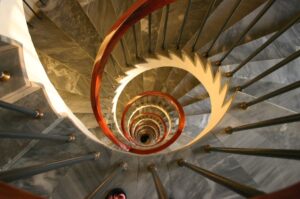 translated from the French

I remember my grandfather, lying fully clothed in the semi-
darkness of his bedroom, eyes staring at the ceiling, searching for
images of his vanished family, while in the living room, his second
wife was serving tea to her friends.

I remember, as a child, one of his fights with my father, who had
kept him away from us for years; and running into him on the
street, embarrassed, as he would hand me a piece of candy, or a
coin.

I remember him, usually so quick to anger, falling silent,
incomprehensibly I thought, as his wife’s nephew sang the praises
of the American army in Vietnam.

I remember him, later in a Paris hospital, delirious, asking me as I
was leaving if I had not taken something from him: his life was
stealing away.

I never knew my grandfather’s family, entirely erased in the war,
and my youth years were spent in my maternal family; they lived
in the same building, on the same floor, directly across from him.

Then came questions about my origins, about my identity, which
at times filled me with great anxiety as I was bereft of markers or
deeper moorings on my father’s side. Those were difficult
questions for me to answer, as I had never lived in the midst of a
family that had disappeared before I was born, and had never
even visited the cradle of my paternal family. So, for a long time
could not claim for myself my elders’ identity.

Time passes: my grandfather and my father, now only
present in my memory. At 32, I am the patriarch of my family.

August 1988: I am in Salonica, Greece’s second largest city,
which my grandfather left at the age of seventeen, seventy-five
years earlier. My girlfriend Isabelle and I have arrived late from Athens,
where we had made hotel reservations with our traveling friends,
another couple. The hotel’s vestibule is covered in a white, speckled black marble.
The welcome at the desk is also reserved as the stone. Our room is clad in marble
as well. It is dusty, but we only plan to stay one night.

The next morning, a note left at the reception desk
informs us, strangely, that our friends
“find the city uninspiring and have left early this
morning in search of a welcoming resort.”

I have not prepared my visit and let the city’s large axial lines randomly
carry us, bereft of friends or guide. The weather is very warm but beautiful.

A veil seems to shroud the city, filtering the
intense light and whitening the blue of the sky.

I wipe my sunglasses yet it does not help. I do not notice
passers-by, and wander in search of clues keyed to the place,
in search of some beckoning. It is early, maybe ten a.m. We find
ourselves in an almost deserted avenue.

My attention is drawn to a store with the sign: “Librairie
Francaise,” in front of which a young red-haired man busies
himself. I walk over to him.

“Could you direct me to the Jewish quarter?”

Surprised, the young man looks at me. “There is no Jewish quarter.”

I must seem perplexed, as he adds, “Go up to the bookstore’s second floor.
My father can tell you more.”

An old man with a sad smile explains to us, all the while
straightening the books on the shelves, that the Jewish quarter
was razed in 1943 and its inhabitants deported. I now have the
answer to my question.

I ask him if he knew my family. My name is unfamiliar to him, but
he suggests I go see the rabbi, whose office is a few yards from
his store.

I meet the rabbi in the staircase. He immediately asks me in
Greek who I am. I introduce myself, and we continue the
conversation in French, which he speaks to perfection, not
surprisingly, as old-style Greeks excel at our language.

He welcomes Isabelle and me in his office, a room with white
walls and blinds lowered to keep the coolness in. He is wearing a
white shirt with a rolled-up sleeve that interrupts the green line of
numbers tattooed on his forearm.

When he hears my name, he clasps my shoulder and replies,
“I knew your family well.”

“They were all butchered!”

That word, its visual stabbing my mind, knowing that it was all worse than
I imagined, makes me shudder. I tell him that I desire to find my elders’ trace.
In the absence of a Jewish quarter, I ask for the cemetery.

“On the way from the airport, you passed the new University.”

I understand that the new University was built on the cemetery.

He adds that the vast cemetery that had existed since Roman
times was razed, and that the tombs’ marble stones, some still
bearing their Hebrew inscriptions, were used as construction
material for the university and as city adornment.

At this recounting, I do not so much feel horror as a sort of
inability to comprehend the systematic, rigorously organized
character of what happened. The will of those barbarians was to
erase and then to deny, more so than to kill; to make the living,
the dead, and their history all vanish; to act as if my roots had
never existed.

The old rabbi, more relaxed than I, who has long lived with this,
accepted this, asks personal questions: are we married, do we have children,
do we go to synagogue?

I answer with a smile, not wanting to go into
detail in front of Isabelle. He wants to invite us for Shabbat, but
explain we are flying to Athens in a few hours.

We take leave. We come out, oppressed, into the open air.

The heat now also is oppressive. I wipe my forehead yet it

does not help. Isabelle suggests we have some lunch to unwind.

I am drawn to the window of a pastry shop. My eyes pick a cake.

I am about to push the door open when I stop short,
unable to take a step onto the shop’s marble floor, this marble memory of
my elders, slammed to the ground, face to the earth, all
throughout the town, in full view of all, unbeknownst to all.

We return to the hotel. I call the porter. He looks strangely at me.
I wonder what he knows of matters. Resenting him, I give him a few bills
to take down the luggage and place it on the baking sidewalk. I feel
feverish. Isabelle goes to pay the bill.

In the airport’s terminal, tiled with marble, I am so eager to get this
over with, that I feel as if I am moving without touching the ground.
I give our tickets to the Olympic Airways hostess. I turn around for one last look.
Like those who know they will not come back.

Across from the Olympic Airways booth, there are only two other airlines
signs: “Austrian Airlines” and “Lufthansa.”

About the author, Marcel Alalof 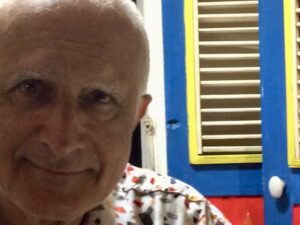 Born November 27 in Casablanca, Marcel Alalof moved to Paris when he was thirteen. Harshly independent, he was a member of no group other than himself. He was a lawyer, a writer, a collector of vintage watches, an intellectual and a believer in reincarnation. Marcel flew away April 30, 2020 when France was locked up due to Covid. He found his own way out…

Salonica is also known as Thessaloniki. Photo of marble stairs in Salonica, from web source.

The Holocaust of the Greek Jews was one of the darkest episodes of the
Nazi occupation of the country.

Once part of thriving communities in several Greek cities, approximately 59,000
Greek Jews were victims of the Holocaust — at least 83 percent of the total
number living in Greece at the time of World War II and the German Occupation.

In Athens, the Italian occupation forces did not participate in the deportation
of Jews to the camps. However, when Italy surrendered to the Allies on
September 8th, 1943, its occupied zone was turned over to the Nazis, who put
Jews on trains and sent them to their deaths.

To date 352 Greeks have received the title of “Righteous Among the Nations”,
an honorific used by the State of Israel to describe non-Jews who risked
their lives during the Holocaust to save Jews from the Nazi claws. This includes
Princess Alice, the grandmother of Prince Charles, who saved Jews in Greece
during Holocaust.

Consolidated from the Greek Reporter article
“The Holocaust of Greek Jews: When 59,000 Perished in Nazi Camps”
by Philip Chrysopoulos, January 27, 2022
https://greekreporter.com/2022/01/27/holocaust-greek-jews-nazi-camps/

___________________
For further reading on the invasion and occupation of Greece under Mussolini’s
Italians and then the Nazis, we recommend these beautiful literary novels :

The Magus by John Fowles