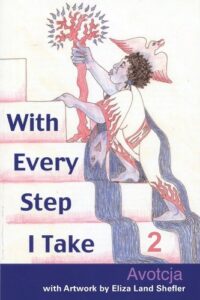 Opening a book of writing by Avotcja — and that’s pronounced, ‘Ah-vah-chah’ — is like opening the door to her crib. In both the literal and slang meanings of that word, because both are important prompts for what you’ll find in With Every Step I Take 2, recently published by Taurean Horn Press in Petaluma, CA. Avotcja Jiltonilro was born to Puerto Rican entertainer parents and raised in New York City, and she artfully integrates Spanish in her English language poetry and prose or pairs translations of pieces like “Diaspora Negra” and “Street Children of the Night”. She’s transplanted her love of place to her current residence in the East Bay, across from San Francisco, celebrated in this excerpt from “Oaktown Blue”:

The Blues didn’t just slip into the Bay Area
It was like a cold burst
The Blues came in waves
Powerful waves
Waves as subtle as a tidal wave. . . and
As painlessly as a pregnant woman in hard labor

A multi-instrumentalist and a current recording collaborator with the band Modúpue, Avotcja frequently performs live with musical accompaniment. Her poetry isn’t structured according to any standard metrics; as in the example above, it’s expressed musically but in improvised bursts suggestive of bop in its forthright passion and free jazz in its unbridled form. Also figuring as subjects for Avotcja’s poems are some of the best-loved musicians working within those genres and in Latin jazz and other ethnically-rooted musics, including Glenn Horiuchi, Jim Pepper, Mahmoud Zoufonoun, Nina Simone, and Carolyn Brandy. Loving empathy sounds of this “Song for Brother Rahsaan [Roland Kirk]”, dedicated to the late blind saxophonist:

When you cry alone at night
Will your vision dry your tears?
Can you play it out? . . . Or say it out?
Does sight scare away your fears:
Does it
Make you more a Man???

Listening to Avotcja live at the monthly sessions she calls The Music of the World/La Palabra Musical (which used to be held at the East Bay’s Fruitvale Library until they had to Zoom during the pandemic) and at San Francisco’s Bird & Beckett bookstore and elsewhere, I can reliably recommend her as one of the only poets who’ll have you wanting to dance, as both her parents did professionally. The imperative is conveyed by the pulse of her prosody, as well as by its unrelenting energy. “Cosmic Soul Mates” is dedicated to a half-dozen dancers:

In “What Is a Poet???”, she speaks, as Lawrence Ferlinghetti before her did, to the imperative of poetry itself:

As far as I can tell, Avotcja is a straight-talker, not a liar, and aggravating historical and contemporary social issues figure big in her writing, much as they do in many of the in-person and online open mics I’ve attended over the past several years. But her sounding out on racism, sexism, doesn’t descend into prosaic polemic pretending to be poetry, as it so often does with others.  Here’s how she approaches “Ancestral Reflections”, reminding us that:

Agitating. . . trying through us to make a better way
Help us create a better day
Hardheaded, gregarious Spirits got their fingers in our everything. . .

And how she remembers that “Papi Was a Dancing Man”:

He wore his blackness like a badge of honor
Moved through the whiter than thou madness
With the grace of greased lightning
Dance his way across stages
That tried bo bury him
In the filth of “their” fear. . .

This collection includes several prose pieces — fiction, non-fiction, or some hybrid of the two —, and even though they’re much longer hauls, for the most part they’re wise and well-told stories, as are the poems. On the cover and interspersed  throughout the book are fantastic and exciting line drawings by Eliza Land Shefler, herself a poet, pianist, and singer/songwriter based in Albany, California, and a founding member of the erstwhile Bay Area Jazz Society and Jazz in Flight organizations. Some of the drawings serve as delightful illustrations of Avotcja’s offerings.

The power and passion in With Every Step I Take 2, together with the groundedness of Avotcja’s approach to her subjects, recommend this collection as a special last-minute holiday gift to almost anyone on your lists. As she continues to appear online with the Lime Square Poets Thursday sessions and elsewhere, I also urge you to experience how these words sound as read by their creator. And as soon as she and you can make it possible in the New Year, get out to hear Avotcja live and in person. Visit her website at  https://avotcja.org/.

With Every Step I Take 2, Paperback $23.95, available at bookstores and online.

Bay Area icon Poet/Playwright/Multi-Percussionist/Photographer/Teacher Avotcja has been published in English & Spanish in the USA, Mexico & Europe, and in more Anthologies than she remembers. She is an award winning Poet & multi-instrumentalist who has opened for Betty Carter in New York City, Peru’s Susana Baca at San Francisco’s Encuentro Popular & Cuba’s Gema y Pável, played with Rahsaan Roland Kirk, Bobi & Luis Cespedes, John Handy and many more. She performs with her own group Avotcja & Modúpue. Avotcja was the opening act for the legendary Poet Pat Parker the last three years of her life.