Enter: Miss Moneypenny
Moneypenny bends over to pour the drinks.

007’s steely eyes twinkle.
Ms. 007 is a Black lesbian Jamaican. She throws her Scotch back as she covertly rubs Moneypenny’s butt.

Now imagine Bond is dapper Draper, aka Mad Men’s Jon Hamm, with tux, martini in one fist and Walther PPK in the other.

Jon Hamm, the nonchalantly magnetic Don Draper, was never cast as James Bond. Draper = Bond = alpha male maximus. Why was Hamm not cast? Because he’s not British? Since the next 007 has been persistently rumored to be the woman as described above (“Nomi” as seen in No Time to Die), a Brit pedigreed accent is the least of Bond fans’ worries. Draper’s answer to “What would you like to drink?” was a Bondian “Anything brown.” As in Bond’s typical room service order of “Coffee: black. Toast: burnt.” ;}

Nor was Hamm cast to (brilliantly) portray Cary Grant in a documentary, nor a Hitchcock remake of, let’s say, North by Northwest or Notorious, (with Scarlett Johansson in the Ingrid Bergman role, please). Or since Hamm was cast in the new lightweight crime comedy movie, Confess, Fletch, why was he not cast channeling Cary Grant in a remake of To Catch a Thief? (With Scarlett also in the Grace Kelly role, please.) Why, Hollywood, why? Please explain these mysteries.

While we’re at it, PTB, please also elucidate why Mad Men voluptuous-beauty Christina Hendricks was never cast as Marilyn Monroe or Jayne Mansfield. At least secretary-turned-Mad Woman, Elizabeth Moss starred as a concubine in another long-running TV series The Handmaid’s Tale, based on Margaret Atwood’s novel. Both Hamm and Hendricks were voted several times to “Sexiest Alive” lists.

Jon Hamm makes a comeback? Hamm indeed never reach the acclaim and adulation of his Don Draper role 2007-15’s Mad Men (eight Emmy Lead Actor nominations before finally a win). Although he seemingly disappeared for some fans, Hamm did continue to work steadily. Besides Hamm’s starring role in 2018’s hostage-actioner Beirut, he starred in Disney’s baseball flick, 2014’s Million Dollar Arm, and played a F.B.I. agent in Ben Affleck’s The Town, and acted in a few other films.

HAMMO FOMO
As himself in the 2022 AppleTV+ self-deprecating ads, he humorously bemoaned his still-struggling career—hey, cast me! (Aired mostly during NFL games.) The commercial “…shows Jon hanging out at home on the couch and surfing through Apple TV+’s many offerings — with Jon scoffing at the fact that there’s all these celebs plastered on the screen, but no sign of him anywhere.

He then asks the camera … ‘Hey, Apple — did I do something to offend you?’ He goes on to pitch himself as someone worthy of a show or movie, like all his famous pals seem to have these days, and even makes a fake phone call to Tom Hanks … which is hilarious.” —from TMZ Sports. Watch Apple’s Hamm ad here on Twitter: https://twitter.com/appletvplus/status/1484586947532050433

Perhaps it’s working (LOL) as Hamm landed a plum role in 2022’s blockbuster Top Gun: Maverick and on at least one episode of television’s latest Fargo. Now Hamm is in the recent Confess, Fletch “comedy,” streaming on iTunes, etc. If the Fletch name is reminiscent of the old Chevy Chase movies, it’s because it should be. They are all are based on Gregory Mcdonald’s “Fletch” series. I say “comedy” because the movie is not very funny, and some of Hamm’s lines just thud. In fact, I considered it an embarrassment for Hamm, and should be for the director and writers, and I just stopped watching after a short time. This does mark a reunion for Hamm with Mad Men costar John Slattery (fun-loving “Roger Sterling”). I missed  that scene, but may force myself go back and watch as I think that Slattery would have made a better Fletch. Hamm plays an unsympathetic and glib art “detective” but he is no Chevy Chase, who’s deadpan delivery and facial expressions somehow carried many good-to-OK comedies. Perhaps Hamm’s AppleTV+ ad was true, he did do something to offend someone.

Surely there are better uses of Hamm’s dramaturgical talents than an inconsequential comedy. We present Exhibit A: One reviewer even compared Hamm to Humphrey Bogart!

From IMDB review of Beirut.
“I appoint Hamm as the next Bogie because in addition to his classic good looks as leading man he captures here and in Mad Men, the uncanny ability to define a film noir hero — self-divided, prone to hitting the bottle, and winning over a viewer no matter how close he comes to betraying his best moral instincts in service of self-interest. Certainly, he could handle a remake of Casablanca without much of a stretch. (Like Bogie, in Beirut, Hamm’s is) a character persona of disillusioned, world-weary masculine presence that springs into action, however reluctantly, when absolutely necessary.” —“lor”— former editor of Motion Picture department of Variety Newspaper (NY HQ). Variety signature for reviews: lor. Chairman, New York Film Critics Circle: 1993/94.

On landing his role in Mad Men, John Hamm said: It was amazing. I read the script, and it was for AMC, and I thought, “They’ve never done anything that’s remotely like a TV show, so what’s that going to be like?” I read the script for Mad Men and I loved it. Then, I realized that a guy who wrote for The Sopranos, Matt Weiner, created it, so I thought, “Okay, that’s pretty cool.” But I never thought they’d cast me—I mean, I thought they’d go with one of the five guys who look like me but are movie stars. Obviously, they didn’t. I literally had to go through six or seven auditions. They flew me to New York to meet all the people at AMC. My final audition was at that bar on the roof of the Hotel Gansevoort. When we were riding down on the elevator, the woman in charge of whatever the decision-making process was told me, “You got the job.” 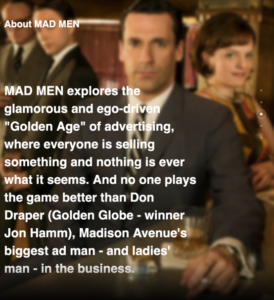 Mad Men, the AMC cable 1960’s period drama of Madison Avenue advertising, ran seven seasons from 2007-2015. The hit was created by Sopranos writer Matthew Weiner, who executive produced, with (fellow Sopranos alum) Scott Hornbacher, who rose up the ranks to co-producer and director.

The show won numerous awards and was acclaimed for almost everything, especially its style and historical accuracy. The Hitchcock influence on the visual style of the series, especially Hitchcock’s North by Northwest, was credited by creator Matthew Weiner. Other influences include David Chase’s The Sopranos, which Weiner wrote for, as well as Hong Kong filmmaker Wong Kar-wai, known for his atmospheric music, bold, saturated colors, and nonlinear narratives. (Look him up – Wong’s In the Mood for Love was ranked second best film of 21st century.)

However, an uncredited influence for Associate Producer/Producer, Blake McCormick, appears to have been housewife, mother, and dynamo, Connie Strycker, of the little San Francisco Bay town of Belvedere, CA. Read the INTERVIEW and judge for yourself.