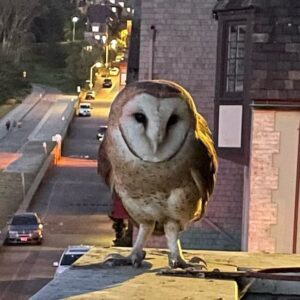 In February, 2022, longtime San Francisco resident Kathleen Volkmann discovered that she was being watched through the bedroom window in her Presidio Heights home.

By barn owls. She began documenting and photographing the owls’ activities on her iPhone and posting to Facebook. To her, and her friends’ delight the visitors were ready for a family. Kathleen soon installed a webcam for better coverage of the unusual and magical event. 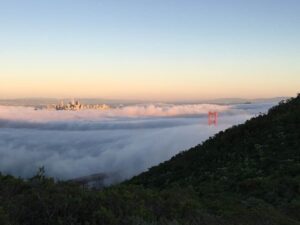 Love on a Rooftop—Barn Owls in San Francisco

It’s nearly noon and the owls have not left. It’s been raining on and off and at one point two owls were embraced with each other.

The barn owls have been coming and going to my house but very irregularly. This owl can be seen picking up an old owl pellet. Pellets are puke, not poop! Owls generally swallow their prey whole but are unable to digest certain parts such as bones, teeth, and fur. The owl’s gizzard packs the undigested parts into a ball called a “pellet” that they spit, or cast, back up following a meal. They contain valuable clues to what the owl was eating and the habitat in which the owl was hunting.

From a FB friend: How special these owls have found your home as a safe haven. The one predominant predator they have in the Presidio National Park is the coyote. Being close to the Park gives them the opportunity to hunt for rodents and other small game from the safety of your home.

Well guess what? I left my iPhone on video mode overnight last week, and what did I see? I saw a coyote walking down the street in Presidio National Park towards my house. It jumped over the Presidio Wall, and walked up my street in front of my house. Not unusual as I’ve seen coyotes walk by before. But— it has slept in my flowerbeds (crushed my plants!) just beneath the owls.

March 28. I purchased and installed a webcam in the flower box outside my bedroom window which the owls have settled in. They have officially nested. I am filming many ‘motion detection’ videos captured by the webcam both day and with infrared at night… I wish I could share all. I have become obsessed as I can view the owls in real time from anywhere. What an adventure this is… 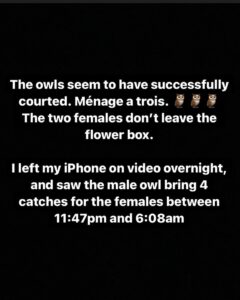 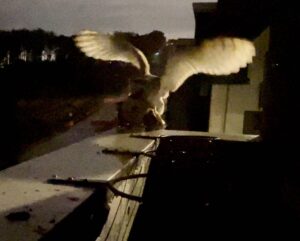 March 31. The male barn owl brings food for the two
females in the nest as they are readying to
lay eggs. They chatter together when the catches are brought.

It’s delightful to hear.
Looks like he’s brought mice, rats, gophers.
He flies through the air with his catch in his
talons, kills it, then picks it up with his beak
to deliver to the waiting females in the flower
box.

Apr 7. Hot Summer Nights in The City. It was 88° in San Francisco today. The male has hopped down into the nest no less than ten times tonight to mount the female and copulate. Copulation occurs every few minutes during the nest site search. Both sexes crouch down in front of each other to solicit copulation. The male mounts the female, grasps her neck, and balances with spread wings. Copulation continues with decreasing frequency throughout incubation and chick rearing.

The owls laid a clutch of eggs in their flower box nest!

The female barn owls stay in the nest all
day, sleeping, preening and incubating the
clutch of ten eggs. They wait for prey to be
brought by the male. So once again the
action is devouring a rodent. 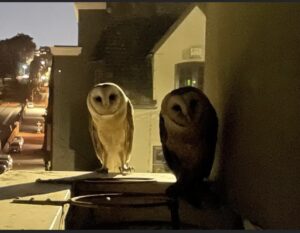 Apr 9. I unfortunately woke up the female barn owls and stressed them out while I was trying to move the webcam. They moved off their clutch of eggs, started hissing, and moved their heads right and left. I’ve learned owls do this at intruders to their nest. They covered their clutch as soon as I was not intruding. They’ve been incubating and sleeping all day, every day. 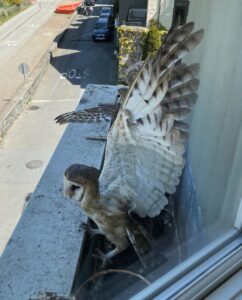 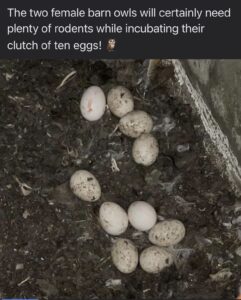 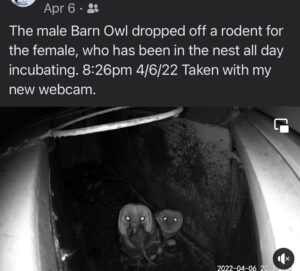 Barn Owl Talons—Owls have the locking, ratchet-like mechanism in their foot which keeps the toes locked around a perch or prey without the need for the muscles to remain contracted. Three of these toes face forward, and one backwards. When perched, or clutching prey, the outer front toe on each foot swivels to face the rear. It is able to do this because of a unique flexible joint. 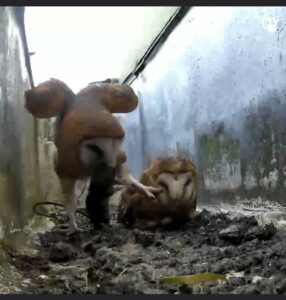 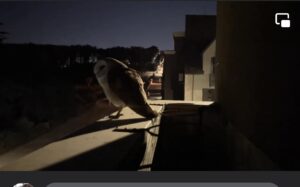 With disappointment and sadness I wanted
to let all of you know that the clutch of ten that the
female laid did not succeed. The nest was
abandoned and the eggs are no longer
viable. So this is the cycle of wildlife and this is the
natural world. I’ve enjoyed and loved my owl
friends for the past two months
tremendously. I’ve had a unique opportunity
– reading about and expanding my
knowledge of barn owls and then
experiencing barn owl life played out in front
of my eyes outside my bedroom window.

Such an intimate opportunity.
Watching and learning about their mating
rituals, and the awe of their production of a
clutch from these beautiful creatures was
immensely joyful.

The overwhelming enthusiasm and curiosity
from family, friends and strangers has made
this shared journey pure pleasure.

I choose to be grateful for this experience.
I’m sad. Very sad. And so very sad for the
barn owls and how it has turned out for
them. My hope is that they are able to
produce another brood this season.

So many of you have been as enthusiastic
as me in watching barn owl life. We were all
excited. So I know this development will be a
disappointment to you too. Thank you for joining me in this barn owl
experience. 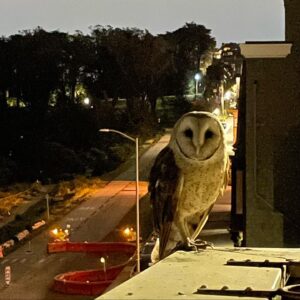 Breaking news! In May the owls started coming back.

The Presidio National Park biologist put me
in touch with a raptor expert, who is also a
general contractor. He designed and custom-
built a barn owl house to fit into my flower
box!

What a production! All for big love of barn
owls! They both came yesterday to do the install! 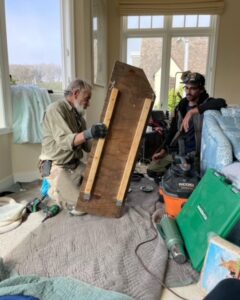 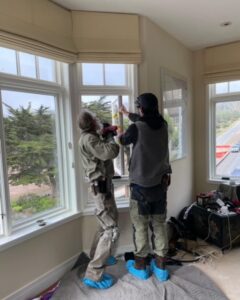 How it went:
Remove window from hinges: Heavy!
Remove two iron planter holders: Rusted
brass screws!
Remove and save all owl pellets from flower
box with ShopVac: Pellets to be put on floor
of new house.
Climb into flower box to clear out drain; it
was filled with pellet debris.
Remove irrigation hoses.
Dry run lesson for me: how to remove/
replace/latch house roof, camera install/
removal, camera level placement.

Hoping the Barn Owls will
feel welcomed. I can’t wait
to watch them move in!!