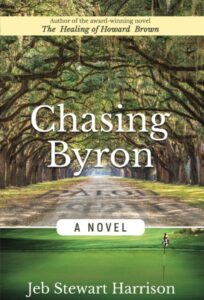 Crazed snake charmers, crooked judges, chicken thieves, golf heroes, mythical Gods, dead voices: Chasing Byron, set in 1945 as WWII is raging to a climax and Byron Nelson is winning one PGA tournament after another, is the Jim Crow south on steroids. A young golfer receives divine orders to challenge Nelson from his dead brother, a casualty of Okinawa. But when an adolescent cousin is found raped after a family reunion, plans go awry. The town judge of St. Francisville decides to frame a local black sharecropper for the rape, triggering a chase up and down the Mississippi that pits family against family in a gripping showdown.

“Although Harrison may be better known for his rock opera based on Funk & Wagnalls and his life-size oil painting of the Sphinx, Jeb’s recent diversified literary works are among my favored gratifications.” —— J.Macon King, publisher of Mill Valley Literary Review, author of Circus of the Sun: a Novel of San Francisco.

In which our hero, young golfer Wyatt Bowman, is delusional with fever from a venomous snakebite.

Wyatt Bowman figured he must have died from the snakebite and gone to heaven, for there, standing on the first tee of the most beautiful golf course he had ever seen, was his brother, Clifford, alongside an unusual looking caddy: a black man dressed up like an old Scotsman, with long mutton-chop sideburns, a jaunty tam o’ shanter, a curly-Q pipe stuck in between his yellowed teeth, and an early nineteenth century one-button frock coat. The caddy had Clifford’s golf bag, a large unwieldy dark leather vessel, slung over his shoulder.

Wyatt looked around. His brother was in the process of addressing his tee shot and hadn’t noticed him yet, nor had the caddy peering down the fairway awaiting Clifford’s drive. Wyatt followed the caddy’s gaze down the fairway, observing the symmetrical cross-cut of the emerald green grass, the gentle, rolling undulations of turf. It was breathtaking, yet there was something odd: there wasn’t a hazard in sight. No ponds, no creeks, no bunkers, no trees, or at least none that would impede a golf shot, just sparkling green as far as he could see.

He looked at his brother: tan, trim, practically glowing with health, his piercing blue eyes glued to the golf ball he was about to hit. His brother brought the club back low to the ground, his arms following the rotation of his shoulders until he was completely coiled around an invisible axis, his right leg and hip providing torque against the rotation of his upper body. He started down slowly, smoothly, leading with a shift in weight from his right leg to left, uncoiling up through his hips, followed by his chest and shoulders, the arms seemingly along for the ride, the clubshaft bending from the force of the human centrifuge; a natural spring unsprung.

The blonde persimmon club head swept through the hitting area, squarely smacking the back of the golf ball and sending it skyward like a rocket shot down the center of the fairway. He followed the flight of the little white orb, sheltering his eyes from the bright sun, until he couldn’t see it any longer, then returned his gaze to his brother, who held his finish, posted up on his left leg, the club now hanging over his left shoulder, it’s energy spent.

The caddy doffed his tam o’ shanter and wiped his forehead with the sleeve of his frock coat.

“’Tis a thing of beauty, lad,” said the caddy in a thick brogue. Clifford handed his driver to the caddy, who wiped it down carefully, pulled a leather headcover over the head of the club and slipped it into the bag.

Then, to Wyatt’s surprise, the caddy and his brother began to lean forward – Wyatt thought they were going to fall face first onto the grass, but instead they spread their arms and took off, slowly, gliding through the air as a swimmer might glide through the water, following the green contours of the fairway.
Wyatt, still unnoticed, leaned forward as he observed his brother and the caddy, and, instead of falling on his face on the grass the air held him up and the next thing he knew he too was gliding above the grass, swooping over the hillocks and swales like a crop duster.

Then he saw his brother and the caddy swoop down onto the fairway, lowering their legs like landing gear, and take up their positions next to Clifford’s drive. Wyatt paused in the air, hovering like a red-tailed hawk on the thermals, and looked down upon his brother and the Scottish caddy.

Suddenly Clifford and the caddy looked up into the sky, saw Wyatt hovering above them, and waved, beckoning him to join them, and so he slowly dropped out of the sky to find himself standing in front of his brother.

Wyatt reached out to shake it but could not grab hold, feeling instead only a warm sensation, as if his brother were made of steam.

Cliff smiled, a sly, mischievous grin, and turned to the caddy. “Qye, this here is the God of Golf himself.”

Wyatt looked at the squat black man, pipe jutting out from his clenched white teeth, green plaid tam o’ shanter perched at a jaunty angle atop his fuzzy head. The caddy smiled.

“Please to make your acquaintance, lad,” said the caddy in a weird combination of Scottish brogue and bayou patois. “Your timing is impeccable.”

Wyatt was looking the caddy up and down, wondering how on earth this little dark-skinned Scotsman could possibly be the God of Golf, or God of anything for that matter, when he noticed the caddy’s bright blue, orange and green webbed-feet.

When he looked up he saw the caddy wasn’t really a caddy at all, but a giant tree frog dressed in a Scotsman’s turn-of-the-century golfer’s outfit. The giant frog grinned, its big red eyes bulging, and Wyatt could hear his brother chuckling behind him. Wyatt turned, confused by the caddie’s transformation and hoping for an explanation from his brother, but his brother was gone.
In his place stood Byron Nelson.

Wyatt gasped as Nelson, who didn’t appear to be aware of Wyatt’s presence, studied the shot. Wyatt was about to stop him when he realized he was part of a huge gallery, a crowd of people standing shoulder-to-shoulder, watching the great golfer. The giant tree frog caddy stood alongside Nelson, a giant golf bag over his shoulder with Nelson’s name in white letters on the side, and the crowd grew silent as Nelson took his practice swings.

Byron Nelson stepped up to the ball, took one last look at the distant flagstick, and was just about to take the club back when the giant tree frog shot out his tongue, wrapped it around Nelson’s neck and sucked him into his mouth as if he were a fat insect.

The crowd let out an uproarious cheer as the frog dropped the golf clubs, pulled a sheet of paper out of his frock coat and began to recite a poem:

And thou art dead, as young and fair
As aught of mortal birth;
And form so soft, and charms so rare,
Too soon return’d to Earth!
Though Earth receiv’d them in her bed,
And o’er the spot the crowd may tread
In carelessness or mirth,
Is an eye which could not brook
A moment on that grave to look.

He then shed his caddy outfit, burped, and hopped off down the fairway.

Wyatt was suddenly woozy, suffocated by the crush of people, and felt himself begin to fall, slowly as if being lowered by ropes, through the bodies. When someone reached out and caught his fall, he felt then an overwhelming sense of relief, as the arms enveloped him and held him.

He tried to see who it was that had saved him, but he couldn’t make out the face, only the sweet scent of fresh lilacs. Purple lilacs, soft and fragrant, all around him now. 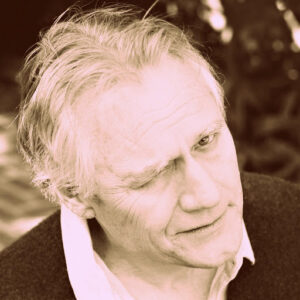