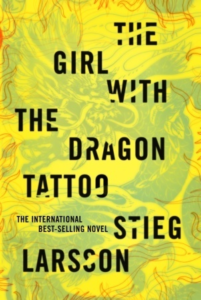 The Girl with the Dragon Tattoo is written by Stieg Larsson and is the first book in the Millenium series. TGWDT was made into two movies, one Swedish in 2009 and one by acclaimed director David Lynch in 2011.

TGWDT follows a recently disgraced investigative journalist, Mikael Blomkvist, and outcast hacker Lisbeth Salander. After being found guilty of slander, Mikael is hired by Henrik Vanger, the former CEO of the successful Vanger manufacturing corporation and patriarch of the Vanger family. Mikael is tasked to investigate the disappearance of Vanger’s niece, who mysteriously disappeared nearly a half-century ago on their family island during a yearly family parade. While Mikael begins his investigation, young Lisbeth works as an investigator hired by a security firm and managed by a state-appointed guardian. The two become linked and start working on the missing Vanger case.

TGWDT is an extremely well-done neo-noir mystery. There were several instances where I shuttered due to the combination of the plot and setting. TGWDT doesn’t leave anything to the imagination and tries to elicit visceral reactions from its reader. Larsson does a great job (IMO) representing the POV of abused and assaulted characters, and exposes that people in power exert reality over those they perceive as inferior. My only critique is that I wish the book ended once the mystery concluded as the plot post mystery dragged; however, it appears to set up next book and the series. 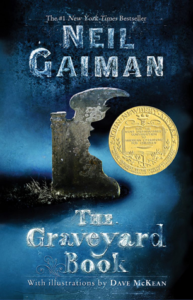 The Graveyard Book was written by Neil Gaiman and published in 2008. The Graveyard Book is about a boy who evades murder as a baby and becomes fostered by ghosts living in a graveyard. The boy, Nobody or “Bod,” grows up in the cemetery learning from eclectic ghosts who “live” on the property. As an adolescent, Bod experiences life and characters that the living do not. Bod encounters a dangerous Sleer, discovers a gravestone entrance to a desert that leads to the city of ghouls; befriends a witch, and so much more.

Gaiman writes a beautiful and charming story about growing up. There is the saying that “youth is wasted on the young,” and Gaiman demonstrates that “life shouldn’t be wasted on the living.” I thoroughly enjoyed the wit and light-hearted nature of Gaiman’s writing by confronting the simple fact that life always moves on. I can see Disney films like Coco and Soul were inspired by Gaiman’s world created by The Graveyard Book.

About our new book reviewer:

Nick King is a former college football captain, now software account Executive, is a major book enthusiast. Being inspired by his father at very young age to appreciate great writing, Nick has had a voracious appreciate for reading. In the last two years, Nick has read 80+ books. His favorite genres are science fiction and historical fiction.

ENOUGH WORDS TO DRIVE ONE MAD?

“The Oxford English Dictionary used 1,827,306 quotations to help define its 414,825 words. Tens of thousands of those used in the first edition came from the erudite, moneyed American Civil War veteran {and murderer} Dr. W.C. Minor, all from a cell at the Broadmoor Criminal Lunatic Asylum.” Publishers Weekly. 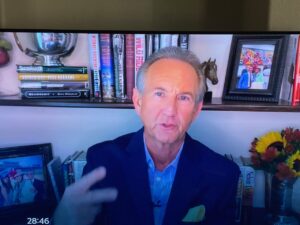 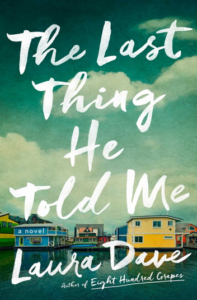 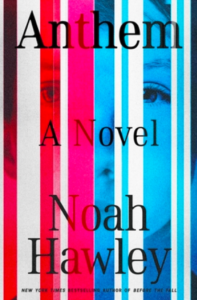 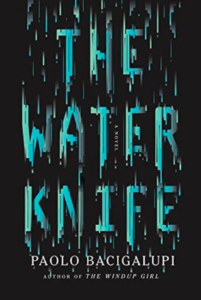 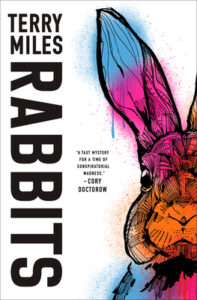 The first rule of Rabbits is— you don’t talk about Rabbits.

RABBITS was another finalist for Goodreads Choice awards for fiction. Rabbits was also based on a podcast. Rabbits is the name of the fictional inter-dimensional game, conspiracy, and cult. The protagonist is the ambiguously-gendered “K”, yes, the same name as Kafka’s protagonist in The Trial, and similarly, Rabbits is also filled with sinister, paranoia inducing, and reality-questioning undertones. (Another character’s name, Hazel, homages the same named character of Watership Down’s rabbit-filled world). One of the sinister aspects of the game, for me to re-coin a phrase: The first rule of Rabbits is— you don’t talk about Rabbits.

K has been chasing this elusive game ever since losing a childhood friend who died during a car accident. The Rabbits game is played by following coincidences, patterns, and other clues hidden in the real world. After numerous failed attempts, K is met by an eccentric billionaire and suspected Rabbits player. He warns K that the game is broken and dangerous. After their encounter, the billionaire disappears, kicking off K’s Rabbits journey.

Rabbits was an imaginative fast-paced science fiction thriller in the new “world is a game” category. K serves as protagonist, but more so a character in a role-playing game (RPG) like in Ready Player One. Like RP1, the novel is filled with pop culture references and retro 80’s games and geekiness. The multi-universes and determinism themes reminded me of the excellent FX series Devs. If you are willing to patiently sit shotgun and be driven through an obscure game and clues, you will enjoy the ride down the rabbit hole.

The Last Thing He Told Me by Laura Dave

THE LAST THING HE TOLD ME was voted Goodreads best mystery thriller for 2021. The book follows Hannah, a newly married wife whose husband disappears after his tech company was exposed for massive fraud (Theranos anyone?). With her husband’s departure shrouded in mystery, Hannah, with the help of her newly acquainted teen stepdaughter, Bailey, attempts to find their husband and father while putting the pieces of her husband’s current and mysterious former life together.

The Last Thing He Told Me was captivating and inspired by Jillian Flynn’s Gone Girl. Besides being an excellent mystery, the Sausalito houseboat setting, Silicon Valley startup, and unlikely mother-daughter relationship provided a fun and refreshing read in an overdone genre.

My only critique, which could apply for most thrillers, the ride is often more fun/exciting than the destination. To Laura Dave’s credit, the build-up was fantastic and compelling, so “sticking the landing” was going to be difficult.

ANTHEM is written by Noah Hawley, and is author of one of my favorite books, Before the Fall. The diversely-talented and multi-award-winning Noah Hawley created and wrote Fargo and Legion TV shows. His other TV work includes the hit Bones.

Anthem is a dark and dramatic view of our current society post-pandemic. If you don’t like politics, I’d advise you not to read this book as the author tries to remain neutral, but it’s pretty evident how Hawley feels about our current political environment.

Anthem follows several teenagers who are weighed down by the “greedy/selfish actions” of their parent’s generation, resulting in global warming, divisive politics, pandemic isolation, and the opioid epidemic. Our key three characters, all institutionalized for various reasons, set out on a quest to start a utopia and save America for their generation.

This book was too much for me; I struggled to finish it, leaving me in a pretty dark state. However, I’m pretty sure that was Hawley’s intention. Besides the dark reality, Hawley portrays, the POV and characters are often hard to follow, contributing to a difficult read. Some sections were thrilling but mostly depressing and confusing. I wouldn’t recommend this book to a friend; however, I appreciate Hawley’s intentions despite failing to deliver.

The Water Knife by Paolo Bacigalupi

THE WATER KNIFE is written by Paolo Bacigalupi, the acclaimed The Windup Girl author. Bacigalupi creates a not-so-distant dystopian future of the United States. Water has become the most valuable state and individual currency, and as a result, the western states and regions are left fighting against each other for self-preservation. As a result, society has fallen into capitalist anarchy where those individuals, states, and groups with water have power. Those who don’t are left to survive on their own while fending off religious militants and gangs.

This was one of the best eco-sci-fi stories I’ve read. I’d imagine that Dune was an inspiration for Bacigalupi. What made The Water Knife so gripping was that this story doesn’t feel too far off from fiction. Water is our most precious resource, yet most take it for granted (case in point, any golf course you see). Societies have broken for far less. The Water Knife reminded me of the hit AMC series, The Walking Dead. The Water Knife and Walking Dead have in common that they demonstrate the level of depravity society and neighbors can exhibit when fighting for survival.

I thought The Water Knife was a much better story than Bacigalupi’s The Windup Girl. The characters were compelling and I was enthralled the entire read. 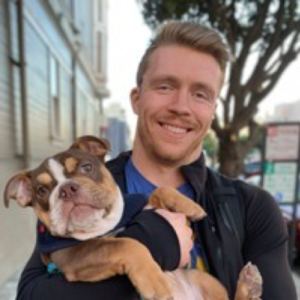 Nick King, a former college football captain, now software account Executive, is a major book enthusiast. Inspired by his father at very young age to appreciate great writing, Nick has had a voracious appreciate for reading. In the last two years, Nick has read 80+ books. His favorite genres are science fiction and historical fiction.